Menu
Sign in
Book a Demo
Get a 24hr quote

Menu
Sign in
Book a Demo
Get a 24hr quote 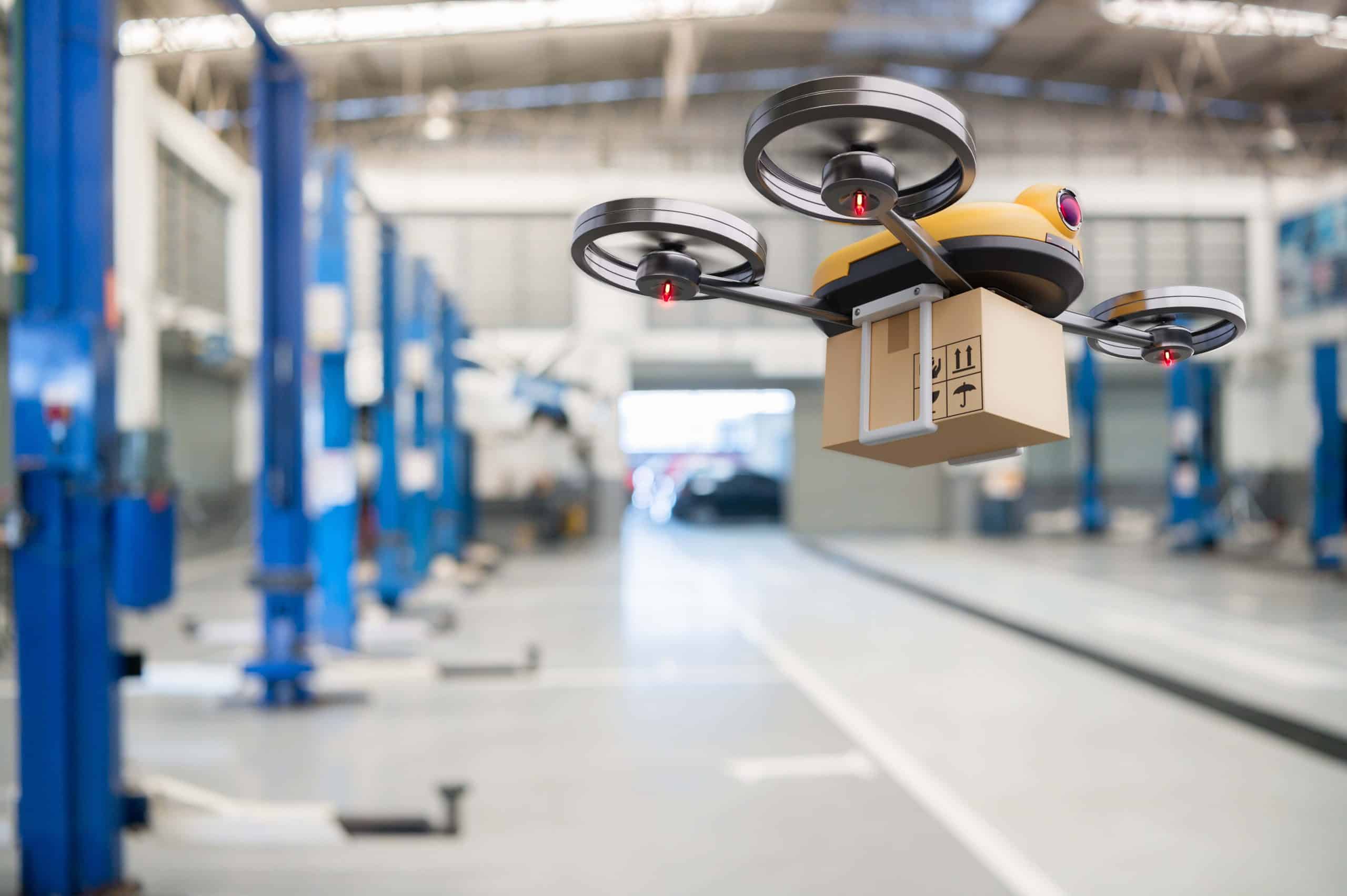 The time of drone delivery: A new chapter in transportation & logistics

Over the past year, we’ve seen an unprecedented boom in tech investment and adoption around the world – and drone delivery is now set to change the future of commercial delivery forever. Today, we’ll be exploring the challenges, the potential and the future of drone delivery.

In 2020, the COVID-19 pandemic created challenges for businesses across almost every industry. However, necessity is often the mother of invention, and the obstacles of the past year have created a huge boom in tech investment and adoption around the world.

Throughout the pandemic, drone delivery proved to be a highly efficient way to transport delicate deliveries that require careful handling and minimal human interaction, leading the UK government to approve their use for medical deliveries during the pandemic, and the US to use drones to transport personal protective equipment and COVID-19 tests.

However, drone delivery is by no means a new phenomenon. Over the past few years, drone delivery has been trialled by several commercial companies, and in 2016, Amazon carried out the first successful ‘Prime Air’ drone-delivered package; delivering a TV streaming stick and a bag of popcorn directly to the garden of a nearby customer.

Although commercial drone trials like these were already underway in pre-pandemic years, they were often restricted by strict regulations. COVID-19 seems to have accelerated drone manufacturing, technology and delivery by paving the way for new airworthiness criteria and regulations. November 2020 marked a critical point for drone delivery, as the FAA (Federal Aviation Administration) proposed airworthiness criteria for the certification of delivery drones for commercial operations.

With the FAA’s new airworthiness criteria, a new chapter in transportation and logistics has begun, as market leaders experiment with using drones to transport food, post, health supplies and other goods to businesses and consumers across the globe.

As we look to the future of airborne transportation, let’s start by examining the current state of delivery drones; from today’s biggest players, to how they work, and the challenges that still need to be overcome for drone deliveries to be successful on a wider commercial scale.

From vaccines to cinema snacks, drone technology can clearly be used to address a wide range of government, corporate and consumer needs. Here are the key ways drones being used by companies, agencies and individuals today:

Drones can be used to transport medicinal products such vaccines, medical samples, protective equipment and other supplies. Perhaps the biggest benefit of drones for healthcare deliveries is that they can fly into remote or otherwise inaccessible regions more easily and quickly than other forms of transportation.

In addition to transporting supplies in the UK and the US during the pandemic, medical drone delivery is credited with saving lives during emergency deliveries of blood in Rwanda and post-hurricane relief in Puerto Rico.

In addition to delivering medical essentials, drones have also been proposed as a solution for rapidly delivering prepared foods, such as pizzas, ready meals and frozen beverages. For example, Tesco have recently announced their plans to trial a drone delivery service, which will see small items dropped off at customers’ homes within 30 minutes of ordering.

Both the Port of Rotterdam and the shipping line Maersk have recently experimented with using drones to resupply offshore ships, instead of sending smaller boats to do the same job. 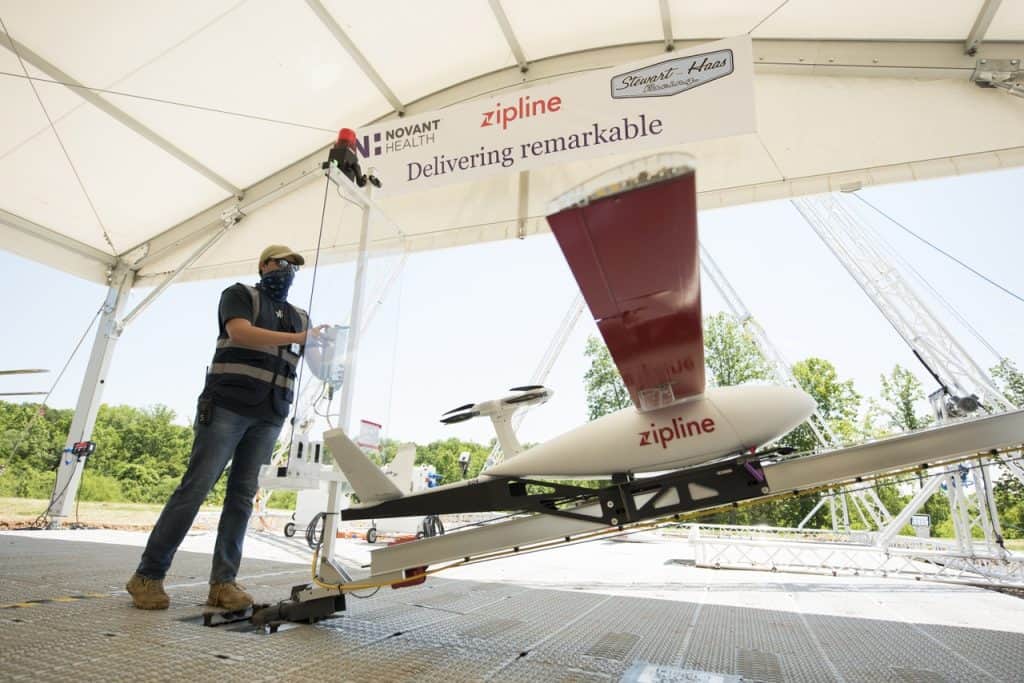 In recent months, the US has seen ten companies receive Federal Aviation Administration approval, allowing them to expand their drone testing programs. Here are three of the world’s biggest players:

San-Francisco-based medical drone delivery company Zipline is redefining the supply chain by making vital medical shipments within the US and across borders. Zipline has made more than 70,000 medical deliveries by drone to date, and its impact so far has been enormous. Zipline has saved lives by sending emergency deliveries of blood in Rwanda, sending post-hurricane relief to citizens in Puerto Rico and delivering COVID-19 tests and protective equipment in the US during the pandemic.

Wingcopter is a German aerospace company providing worldwide drone solutions for commercial and humanitarian applications. To date, the company has partnered with commercial and humanitarian organizations to perform drone delivery of critical supplies in Africa, the South Pacific, Ireland, and Scotland. During the pandemic, Wingcopter partnered with the NHS to deliver medical test samples and other supplies to a hospital on a remote Scottish island. As such, Wingcopter has been recognized by the World Economic Forum as a ‘2020 Technology Pioneer’.

Drone technology: what makes it possible?

As a leading manufacturing platform ourselves, at Geomiq, we’re fascinated by the efficiency and innovation of commercial-scale drone manufacturing. Let’s take a look at the drone technology that gets these aircrafts off the ground:

The specifics of drone manufacturing will vary greatly depending on what the delivery drone was designed to do/deliver, and where it is heading to. However, two of the most common drone configurations are a multirotor and a fixed-wing design:

Notably, there are also hybrid approaches that use multiple horizontal rotors for take-off and landing, and vertical rotors paired with a fixed-wing for forward flight.

Drone manufacturers typically use brushless DC motors to keep drones in the air as they are cheap, light, small and extremely powerful. The propeller blades of the drone turn at very high speeds, so manufacturers look to use material for these rotor blades that maximises the strength to weight ratio.

Some brushless DC motors are made from carbon-fiber reinforced composites, while others are made of thermoplastics (which are cheaper). Drone manufacturers also use lithium ion batteries for most drone configurations because they provide a lot of energy and power, but are still relatively light (so do not weigh down the drone).

Of course, in addition to all of these sensors, it’s also vital to have a great Ground Control System for safe commercial drone operations. The drone operator needs to manage their fleet of aircraft and monitor the broader airspace, and for commercial deliveries, ground control systems are also vital for receiving and tracking orders. 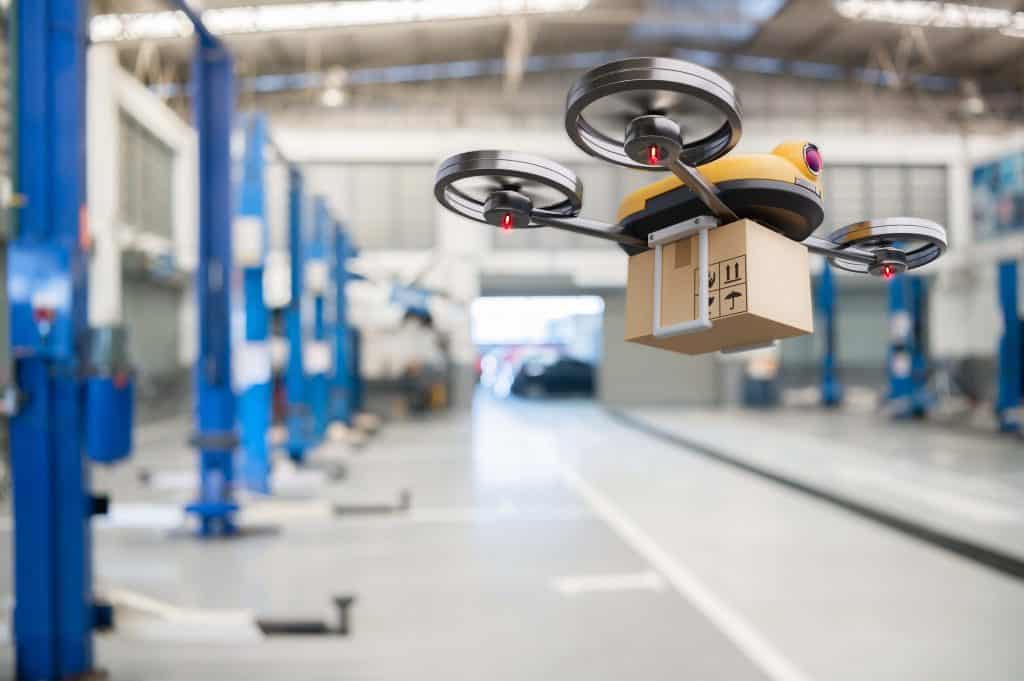 The challenges of drone delivery

Although drone manufacturing and drone technology has come a long way in recent years, there are still significant social concerns surrounding the widespread use of delivery drones.

For example, many fear that drones – like other forms of automation – may lead to higher levels of unemployment. There is, of course, a counterargument to this; drones may actually create entirely new jobs for packers, drone maintenance staff and ground control personnel.

Additionally, there are concerns that drones littering the sky might constitute a form of visual or noise pollution, and may be potential hazards to citizens below. It’s highly likely that a period of adjustment will take place before drones are widely accepted in society. As Mischa Dohler, Fellow of the Royal Academy of Engineering and Professor at King’s College London, puts it: “Socially, it will take a while (if ever) for us to accept volatile things flying over our kids’ heads, which we know could potentially crash any time.”

On top of these social concerns, there are also many practical considerations to be taken into account. For example, according to Mohammed Shaqura, of the University of Leeds’ Real Robotics Lab: “While the price of the technology is justified by the value of the service provided – with 80% reduced cost claimed by DHL in China – scaling and generalising these systems can be tricky.”

Shaqura also makes the point that “Flying conditions like wind and rain can affect the stability of the flying robot and pose risks of degraded or potential hazards. Innovation is also needed for autonomous accessible charging systems. Wireless charging pads or hot-swappable batteries might be the answer”.

The future of drones

As we’ve explored, socially and logistically, there are still several complex challenges associated with drone delivery transportation and logistics.

However, with the introduction of new airworthiness criteria, the excitement of consumers around faster ecommerce delivery and the key players’ impressive track records of saving and improving lives around the world, it looks like drone delivery might be about to truly take off.