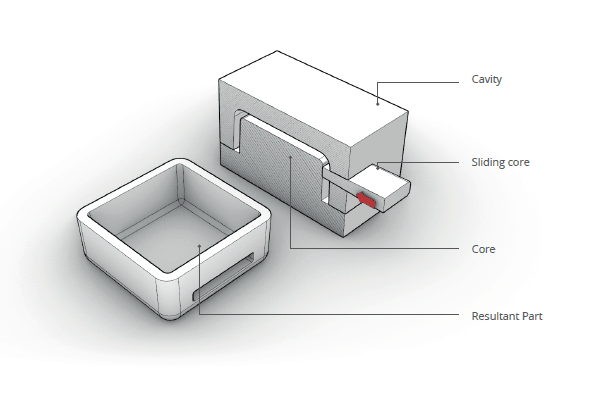 6 top tips for dealing with undercuts on moulded parts

Wondering what the implications are of design features on injection moulded parts? Find out how you can best deal with undercuts to reduce the impact on the manufacturing process – and ultimately the component cost.

It would be great if parts were always designed for manufacture; not only would it be easier for the toolmakers and moulders, but it would also be more cost-effective for the customer. However, life is rarely that straightforward, and many plastic parts perform functional jobs such as acting as a clasp or fastener, or interconnecting with another component using features like snap-fits or threads. We take a look at why undercuts in injection moulding create a challenge for the moulding process and how to overcome them when designing your injection moulded parts.

How does injection moulding work?

Injection moulding uses a tool made of two parts; a core and a cavity. Heated plastic is forced into the cavity of the tool to create the shape of the part, and, once formed and cooled, the two halves are released to extract the moulded component, an automated process known as ejection. When high volumes are manufactured a tool can contain multiple cavities, all injected at the same time through runners which take the molten material to each mould cavity.

An undercut is a feature on an injection moulded part that prevents the component from being ejected from the mould tool in the usual way. Examples of an undercut feature include lips, cavities, threads, holes for bolts or screws, hooks and clasp features.

Why do undercuts create a challenge for injection moulding?

Undercuts prevent parts from being extracted easily if tooling is designed in the standard method using a core and a cavity. When undercuts are included in the part design, adjustment of the mould design is required to enable the moulded part to be removed from the tool. There are times when a redesign of a part is preferable to an alternative mould design because the cost of creating some tool features can be prohibitive; it may be simpler and more cost-effective to alter the component’s geometry to suit the manufacturing process.

Where possible, then, the question of the feasibility of redesigning the part for manufacturability tends to be asked first, because a mould that requires secondary operations can quickly add extra cost to the tooling manufacture, and the requirements of the moulding process may result in both manual intervention (and therefore higher labour costs) as well as a higher scrap rate due to the additional room for error, particularly where multi-cavity tools are planned. However, where this is not possible or practical, there are some guidelines you can follow which will help to ensure that the injection moulded part uses the most effective manufacturing process and therefore provides the most aesthetic and cost-effective result.

If there is the need for an undercut or a cavity within the part itself, such as you might find in a beaker or a hand tool grip, then the mould tool design solution tends to be to lay the part on its side so that the parting line is along the length of the part. There is then a third part to the tool, which travels in sideways on an angled pin to create the undercut within the part. The side action can be automated so that it slides in at the same rate as the other two parts of the mould, and retracts when they do so that the moulded part is available for extraction only once the side action has completed. The side action insert must travel perpendicular to the part itself.

Lifters are not dissimilar to the side action mechanism, except that in this case there is an angled insert which, as the relevant half of the mould is released and the part ejected after moulding, the insert moves away from the moulded part at an angle to release it from the undercut. Compared to some of the other undercut solutions, this one is reasonably cost effective as it can be automated and becomes part of the standard ejection process, relying on the geometry of the tool design to allow for demoulding of the part.

Sliding shutoffs are used when a feature cannot easily be created through other means, such as a hook protruding from the side of a moulding. To create the hook, there will be a sliding shutoff through the hole in the wall of the main component to create this undercut. The rest of the hook feature will be produced by the half of the mould.

The difficulty with sliding shutoffs is that, if designed as two mating parts of a tool, there will be significant friction each time the tool is opened and shut; plastic cannot be allowed to form beyond the shape of the feature and so the shut-off must be extremely tight. To overcome damage to the mould, which would in turn very quickly produce moulded parts with an unacceptable finish, each of those surfaces must be drafted by around 3˚ so that full metal-to-metal contact is not made until the mould is fully closed and a mechanical seal is formed between the two faces.

Bumpoffs are used for products that snap into place with a slight lip, such as lens covers and mobile phone cases. An insert is created to form the geometry of the pocket required and is bolted into the mould. If the material is pliable enough (softer plastics rather than reinforced materials), it will simply pop back over the mould feature during the ejection process by briefly deforming, but will retain its finished moulded shape. In order to achieve successful ejection, the bumpoff must be smooth and have radiused rather than sharp angles. Bumpoffs can only be used if they are located away from strengthening features such as ribs, and must have a lead angle of between 30˚ and 45˚.

Where an undercut is required with more difficult features such as a lip with a sharp angle, or an additional feature such as an awkwardly positioned hole does not allow for a solution like a bumpoff, then hand-loaded inserts are used. This solution sounds exactly as it is described; one or several machined parts of the mould are individually hand loaded into the necessary section of the cavity prior to the plastic material being injected. Once the moulded part has been formed, the two halves of the mould separate and then the hand-loaded inserts are retrieved in person. The downside to this is that it extends the cycle time of the part production, therefore increasing cost – and, of course, if the tool has multiple cavities, the person must load and unload each individual cavity.

For further detail around how to design a moulded part for manufacture, why not check out our injection moulding design guide; although we provide a free DFM (design for manufacture) service, it will save you time – and ultimately money – if you can approach the initial design process of your component with some of these manufacturing considerations in mind from the outset.