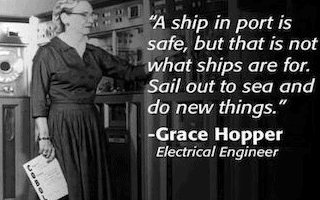 This International Women’s Day, we are honouring some of the truly inspirational women in STEM who have changed our world for the better. Together, let’s be inspired by their achievements, celebrate the power of diversity and learn how to empower women in engineering today.

In honour of Women’s History Month (and International Women’s Day on March 8th), we’re celebrating the women in engineering, manufacturing and other STEM careers who are working to transform all of our lives for the better.

To do this, we want to showcase some of the women throughout history whose contributions to society have made our lives what they are today. We’ll also take a look at how we can nurture and empower the talented women working in engineering and manufacturing roles who are already shaping our future.

Let’s start by taking a look at how many women work in engineering, manufacturing and other STEM careers in 2021.

The rise of women in engineering

However, the number of female engineers in our country is gradually rising, and one recent report by WES showed that 46.4% of girls in the UK aged 11-14 would consider a career in engineering one day.

In fact, the data shows that more women are beginning careers in all STEM fields than ever. In 2019, government data showed that there were over a million women working in core STEM occupations, and WISE found that between 2016 and 2019, the percentage of women working in STEM roles grew from 21% to 24%.

At Geomiq, we’re passionate about doing our part to keep accelerating these numbers across the country. We want to do all we can to encourage girls and women everywhere with an interest in engineering or manufacturing to pursue their passions and help transform society forever. We believe that to do this, we must celebrate the work of inspiring female engineers throughout history.

After all, although engineering roles have only become widely available to women in recent decades, women have been playing vital roles in engineering, manufacturing and other STEM fields for centuries.

Without further ado, let’s celebrate and remember some of the wonderful women – both past and present – who have transformed the world as we know it. What can you learn from these inspiring women today?

10 women in STEM who have changed the world

Here are just a few examples of the women who inspire us at Geomiq:

Born in 1918, Katherine Johnson graduated from University at 18 and was awarded the Presidential Medal of Freedom in 2015 for a lifetime of work as a pioneering physicist, mathematician and space scientist. She did the calculations that guided NASA’s 1962 Friendship 7 Mission, co-authored over 25 scientific papers and was one of NASA’s first female African-American scientists. A true inspiration!

Radia Perlman developed the algorithm behind the Spanning Tree Protocol (STP), an innovation that made the modern internet possible. Dr. Perlman even developed a child-friendly programming language used by children as young as 3 years old!

Famous quote: “The world would be a better place if more engineers, like me, hated technology. The stuff I design, if I’m successful, nobody will ever notice. Things will just work, and will be self-managing.”

Marie Curie is primarily remembered for her discovery of radium and polonium, and for her huge contribution to finding treatments for cancer. She was the first woman to earn two Nobel Prizes (for Physics and Chemistry), and her discovery of polonium and radium, as well as her championing of the development of X-rays, has helped save millions of lives to date.

Born in 1815, Ada Lovelace is sometimes referred to as the first ever programmer, because she wrote about how the notion of a specific engine could transition calculation to computation. Every second Tuesday in October is known as Ada Lovelace Day; a day dedicated to celebrating the achievements of women in STEM careers, as we are doing now!

Famous quote: “Understand well as I may, my comprehension can only be an infinitesimal fraction of all I want to understand.”

Florence Nightingale is known for her heroic nursing in the Crimean War, where she helped reduce the death rate from 42% to 2%. She was a visionary designer of hospital systems and pioneered the improvement of sanitation in working-class homes. She had a genius for presenting statistical data in graphic form, and is known today as the inventor of modern nursing.

Famous quote: “I attribute my success to this – I never gave or took any excuse.”

An American computer scientist and a Rear Admiral in the US Navy, Grace Hopper invented the first programming language to use English words. Even though she was only 105 pounds, well under the minimum weight for joining the navy, she got an exemption and enlisted in World War 2, and while working for the navy, she coined the term ‘debugging’ before going on to develop the world’s first operational compiler.

Famous quote: “If it’s a good idea, go ahead and do it. It’s much easier to apologise than it is to get permission.”

Famous quote: “We’re having an information explosion, among others, and it’s certainly obvious that information is of no use unless it’s available.”

Roberta Bondar was Canada’s first female astronaut and the world’s first astronaut-neurologist. Roberta has received many honours throughout her life, such as the Order of Canada, the Order of Ontario, the NASA Space Medal, over 22 honorary degrees, and induction into the Canadian Medical Hall of Fame.

Famous quote: “When I was 8 years old, to be a spaceman was the most exciting thing I could imagine.”

After graduating from medical school in 1867, Rebecca Cole became a public health advocate, physician and hygiene reformer in the US. Near the start of her career, she took issue with the biased data used to conclude that a lack of hygiene was the cause of inner city families’ high death rate from consumption. She opened the Women’s Directory Center with Charlotte Abbey, provided medical and legal services to destitute women, and became the esteemed colleague of the first US-educated female doctor.

Famous quote: “If you imagine a 2,000-piece jigsaw puzzle, this discovery is just one piece in the middle of that puzzle.”

Born in 1945 in Ohio, Adele Goldberg was the only woman among the group of men who built the Smalltalk-80; a programming language for Graphical User Interface (GUI). Adele presented the Smalltalk-80 system to Steve Jobs, who implemented many of her ideas into his Apple products, so if you’re reading this article from an Apple device, you’ve got Adele to thank!

Famous quote: “Don’t ask whether you can do something, but how to do it.”

How can businesses help empower women in technical roles?

There are many ways your business can help support women in engineering and other STEM careers. Let’s dive into a few:

It’s important to remember that most tech products are created for a wide range of people – so it helps to have a diverse team of innovators behind them!

Fostering a diverse and inclusive company culture is one of the best ways to invite fresh perspectives, combine a multitude of strengths and ensure that the work you’re doing is beneficial to everyone.

Diversity is actually one of our core values at Geomiq, as we believe that inviting people of different genders, backgrounds and cultures to work together towards a common goal is crucial for inspiring real innovation.

In their frequently cited article for ‘The Atlantic’ called ‘The Confidence Gap‘, Katty Kay and Claire Shipman assert: “Compared with men, women don’t consider themselves as ready for promotions, they predict they’ll do worse on tests, and they generally underestimate their abilities.”

This is a complex problem that perhaps stems from factors such as upbringing, societal pressures, and biology. However, there are plenty of organisations, events and workshops that aim to help deconstruct these false beliefs and inspire women to have more confidence in their abilities. We’d encourage all managers in STEM fields to do their research into which workshops and events are being hosted nearby, and consider attending them as a team.

#3 Openly celebrate the achievements of both male and female engineers

Most of the most well-known names – and faces – in the history of science are male, and it tends to be male engineers who we talk about the most.

However, as we’ve seen, there are also a huge number of women who have discovered, achieved and created incredible things.

In conversations with your team, highlight these women’s achievements as much as you emphasise their male counterparts’ contributions to science, so that more women in STEM get the recognition they deserve – and your female employees feel inspired to make history too.

In just one article, we can’t even come close to speaking about all of the incredible women changing the world of engineering. Nevertheless, we hope this piece serves as an important reminder to celebrate what engineers of every gender can bring to the table when it comes to innovating, creating and transforming the world.

Let’s continue celebrating the achievements of not only the incredible female engineers that have come before us, but the hardworking women around us who are transforming all areas of society today. The statistics show that there is still much more to be done to reduce the gender gap in STEM fields, so let’s work hard to continue moving in the right direction as a nation.

From the Geomiq team to you – happy Women’s History Month! Let’s keep learning, progressing and innovating together.