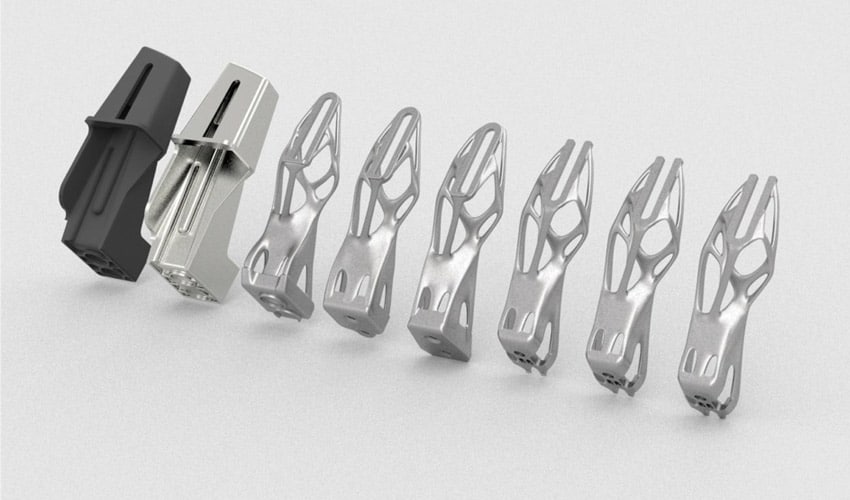 Topology optimisation is taking the engineering of mechanical components to a whole new level. But how do the resulting designs align with our manufacturing facilities?

The natural world is not only better understood and more closely observed than ever before, but our experience of this world through the lens of naturalists such as Sir David Attenborough has opened our eyes to the incredible adaptation of creatures within their habitats. But these are not the only ways in which we’re getting closer to nature; some of the most elegant design solutions can be found in our natural world, and so why wouldn’t we, with the technology to assess and mimic such evolutionary wonders, use them for optimising our own creations? We explore how nature’s approach to design is influencing our engineers and take a look at how this change fits in with the manufacturing techniques that suit both the intended materials and the available budgets.

What is topology optimisation?

Topology optimisation is the process of taking a mechanical component to its most efficient design, usually through the reduction of materials; in removing material from areas of which are not structurally critical, weight savings can be made and therefore performance efficiencies gained. Using Finite Element Analysis (FEA), topology optimisation requires a careful balancing act in keeping the item strong enough to perform its function, whilst using the absolute minimum of materials in its construction.

Natural selection has, over millions of years, resulted in structures and solutions that are perfectly optimised for their uses. Biomimicry is the design and production of systems that are modelled on existing biological systems and processes found in nature. The study of biometric structures for use in topology optimisation is well established; in this paper, Wootton et al (2003) consider how to model structures of insect wings and look at the option of medical imaging devices as a way to potentially develop FEA models based on these structures.

A great example of biomimicry in product design can be found in the Shinkansen Bullet Train; streamlined to travel more quietly and efficiently than standard trains, the aerodynamics used in the forefront of this sleek design were based on the engineer’s knowledge of the silent flights of owls and the splash-free water entry of kingfishers. The Biomimicry Institute explores this engineering feat and the design process behind it.

How does topology optimisation fit into the manufacturing process?

One of the advantages of topology optimisation is that the generative design process can be undertaken using simulation techniques before any physical manufacturing processes take place. FEA creates a simple mesh of the area of the design to be worked on, and that mesh is analysed for stress distribution and strain energy, highlighting any areas where material is used inefficiently and, through a graduated process, removing the material and assessing the resultant overall structure for integrity. This optimisation process, when compared to traditional prototype and testing processes, cuts down on both material waste and cost in terms of time and resources required to produce and test parts.

Many of the traditional manufacturing services available for producing mechanical components are largely unsuited to designs created using a topology optimisation process. However, additive manufacturing methods such as 3D printing allow for the production of much more complex designs, and the geometries and shapes created through the generative design process of optimisation require exactly that.

The technologies of both additive manufacturing and topology optimisation have developed alongside one another to create a happy partnership. Depending on the demands of the topologically optimised shape, CNC machining and laser cutting can, in some cases, produce the finished component, so 3D printing isn’t the only viable manufacturing service that will partner well with topology optimisation but it is often the obvious choice for more complex shapes.

Why is topology optimisation such a gamechanger?

The advanced analysis techniques developed for topology optimisation use mathematical models to produce these efficient, often organic-looking designs for mechanical components. This process was simply not possible until software packages were developed enough to provide advanced simulation and design process solutions.

Who is using generative design and biomimicry?

The aerospace industry values weight saving above just about any other factor when designing mechanical components; the weight of an aircraft dictates the amount of fuel used on a journey and therefore the cost per passenger. Similarly, automotive manufacturing has a focus on weight reduction versus strength and has been one of the pioneers of topology optimisation. Medical industries use the technology slightly differently, with a much bigger focus on biomimicry, creating prosthetics and implants that directly reflect the density and structure of a body part, with optimisation allowing for developers to prolong the lifetime of that part and make it more comfortable.

There must be some drawbacks!

Manufacturing plants and design studios around the world haven’t gone out and replaced all their usual kit with banks of FEA modelling computers and 3D printing machines, which suggests that, whilst these technologies are incredibly progressive, they may not be for everyone. There are some disadvantages:

Manufacturing process limitations: Additive manufacturing has come on leaps and bounds in the last decade, but there are still materials which cannot be produced in this way, such as specialist elastomers which require a process of vulcanisation. Even if the required material is available, additive manufacturing does have limits in terms of what can be produced and the final design should still be checked for manufacturability.

The assembly: If engineers were to look only at topology optimisation during the design process, it may be that the build quality and efficiency would not be up to scratch; the overall assembly must be considered as a whole.

Costs: One of the down sides to topology optimisation is that because of its generative design process, the time taken during the design and simulation phase can be costly. Also, whilst additive manufacturing processes such as 3D printing have come down in price in recent years, for volume production it is generally not the most cost-effective option. Plastic injection moulded components are still likely to be cheaper for high volumes, and so there may be a balance to be had between optimisation of the design and manufacturability. It is possible, with some of the topology optimisation software packages, to include constraints around the final design so that the finished part can be manufactured using traditional methods. This paper by Mantovani et al (2017) looks at the generative design process of developing an automotive part purely using topology optimisation methods, compared to the results when combined with designing for manufacture.

The processes of topology optimisation and the use of biomimicry in engineering and design are clearly here to stay, and are taking our goals of both sustainability and performance efficiencies to the next level. However, there must be some consideration around the ultimate balance between designing for efficiency and designing for manufacture.